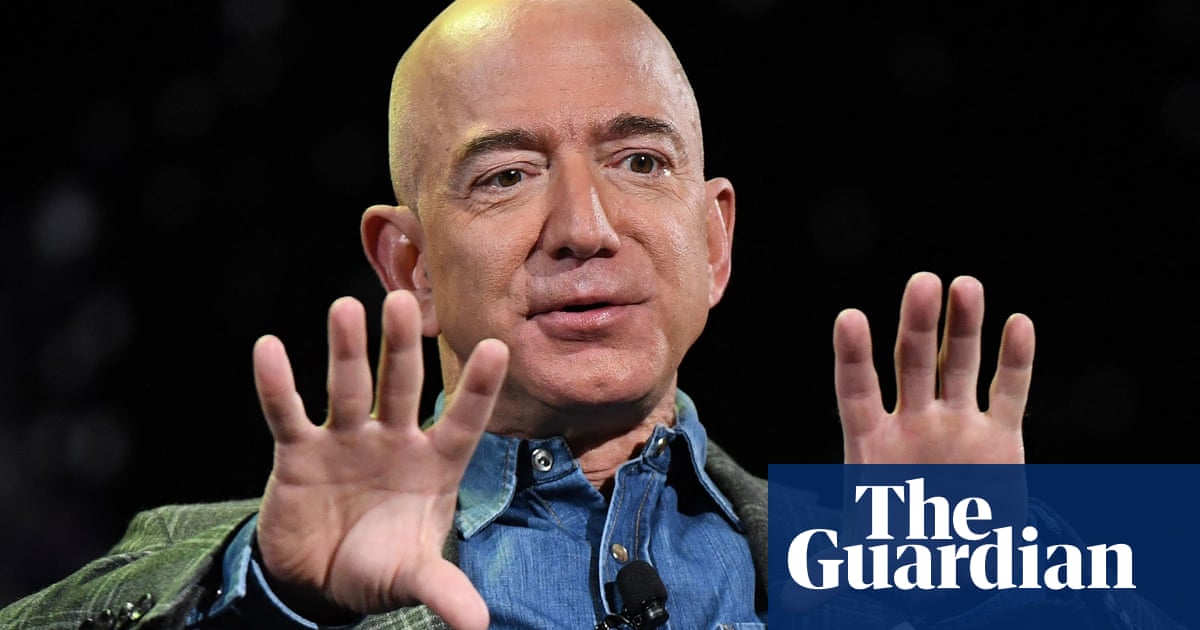 Amazon is planning to dismiss about 10,000 people in corporate and technology jobs starting as soon as this week, the New York Times reported on Monday, citing people with knowledge of the matter.

The cuts would be the largest in Amazon’s history and come as other tech companies including Meta and Twitter are also shedding workers.

Amazon’s cuts will reportedly focus on the e-commerce giant’s devices unit, which houses voice-assistant Alexa, as well as its retail division and human resources.

The company did not immediately respond to a request for comment. As of 31 December last year, Amazon had about 1,608,000 full-time and part-time employees and the cuts would represent about 3% of Amazon’s corporate employees and less than 1% of its global workforce.

Amazon’s founder, Jeff Bezos, has warned that he believes the US is either in or heading towards a recession and that people and corporations should “batten down the hatches”. 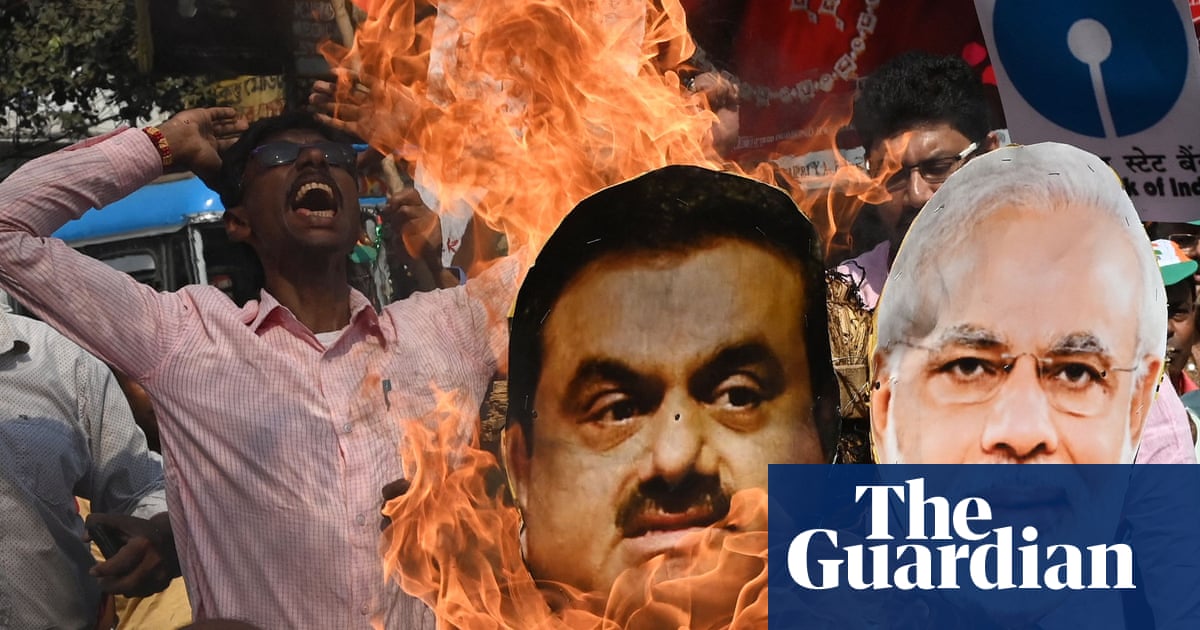 The crisis engulfing beleaguered Indian conglomerate Adani Group is spilling into politics, with hundreds of members of India’s opposition parties taking to the streets to demand a probe into fraud claims that are weighing on the broader Indian market.

Adani has lost about US$115bn from its listed entities, representing well over half its value, in a fortnight of heavy selling sparked by allegations by US investor Hindenburg Research that the conglomerate is engaged in a “brazen stock manipulation and accounting fraud scheme”.

Adani, a ports-to-power conglomerate that owns the Carmichael coal and rail project in Queensland, has denied the allegations in a detailed 413-page response. It won a rare reprieve from the stock rout on Tuesday after it repaid more than US$1.1bn in loans earlier than expected, easing some concerns over its debt load.

Share prices of several of the group’s entities, including its flagship Adani Enterprises, rose in early trading in Mumbai on Tuesday, although overall losses are steep. The conglomerate is also due to report what will be closely watched financial results.

Now in its third week, the Adani crisis threatens to escalate further after both houses of India’s parliament adjourned on Monday for a third consecutive sitting day amid demands for the matter to be debated in parliament and a supreme court inquiry into the allegations. The prime minister, Narendra Modi, is seen as close to the conglomerate’s chairman, Gautam Adani, and his government has been accused of protecting the Adani Group from scrutiny.

“It is clear that the Modi government is running away,” Jairam Ramesh, the general secretary of the opposition Congress party, said.

Opposition members have protested across the country this week, including outside several offices of a state-owned insurer and bank, both of which have exposure to Adani group companies. On Monday, over 200 members of the Congress party were detained for staging protests in Assam.

Mark Humphery-Jenner, an associate professor of finance at the University of New South Wales, said while the decision by Adani to make early loan repayments assuages some concerns, investors remain sceptical of its worth.

“It does seem like the market isn’t really believing what Adani is trying to say,” Humphery-Jenner said.

“The market doesn’t believe that Adani is worth anywhere near what it was, or potentially what it is currently trading at.”

Along with the stock selloff, bonds issued by Adani companies are trading at distressed levels amid fear that it might not meet loan obligations.

“Adani is being treated as a financial pariah at the moment,” Humphery-Jenner said.

The plunging share prices and recent decision to abandon a share sale raises questions over where Adani will turn to raise capital and whether it will need to sell assets.

Adani has said it has an “impeccable track record” of servicing its debt.

The wealth of the company’s billionaire chairman has slid alongside the value of his companies. After sitting alongside Jeff Bezos and Bill Gates among the world’s richest just a couple of weeks ago, Adani has dropped out of the top 20, according to the Bloomberg billionaires index. 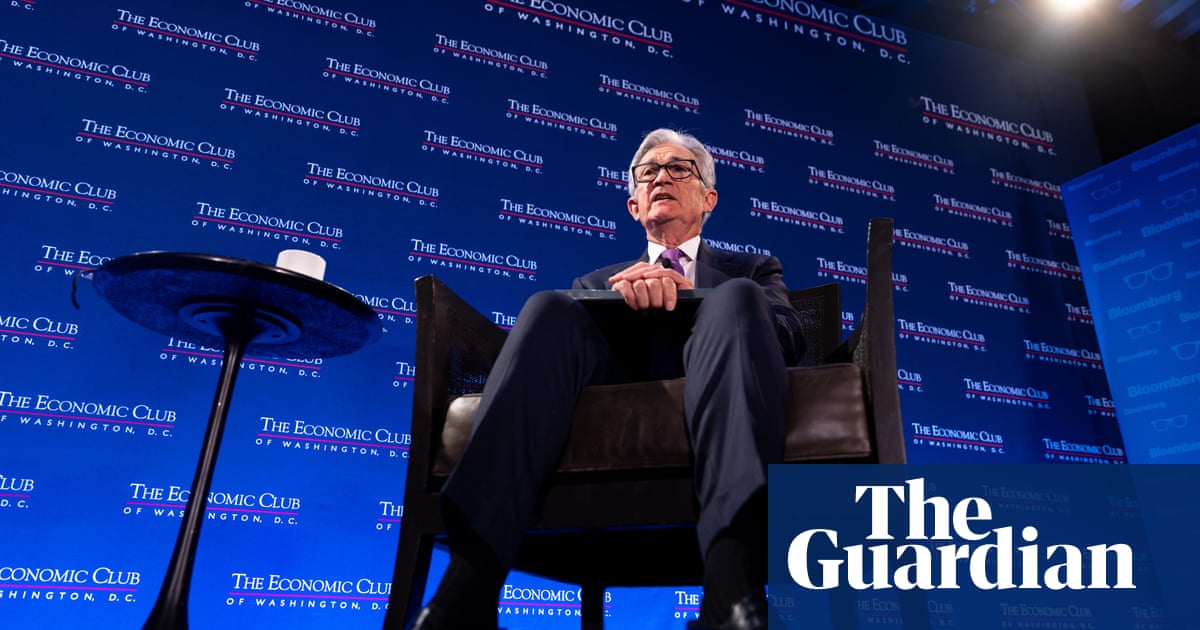 The Federal Reserve chair, Jerome Powell, has said that more interest rates rise will be needed to cool inflation and the red-hot US jobs market.

“We think we are going to need to do further rate increases,” Powell said on Tuesday at the Economic Club of Washington. “The labor market is extraordinarily strong.”

The Fed chair’s comments came hours ahead of Joe Biden’s State of Union address to Congress at which he is predicted to tout his administration’s economic record, including strong job growth.

The US added 517,000 new jobs in January – far higher than expected and a sign of the continuing strength of the jobs market. The report came two days after the Fed announced another quarter-point increase in its benchmark interest rate, its eighth consecutive rate increase as the central bank fights to tame inflation.

“The disinflationary process, the process of getting inflation down, has begun and it’s begun in the goods sector,” Powell said in Washington. “But it has a long way to go. These are the very early stages of disinflation.”

Reacting to the stronger-than-expected employment report, analysts now expect interest rates to rise above 5% to ease wage pressure in the labor market and begin to cool inflation to the Fed’s 2% target. In December inflation stood at 6.5%.

While some have begun to declare victory over inflation, Powell said last week that officials need “substantially more evidence” to be confident that inflation is heading downward.

“The reality is we’re going to react to the data,” Powell said on Tuesday. “So if we continue to get, for example, strong labor market reports or higher inflation reports, it may well be the case that we have to do more and raise rates more than is priced in.” 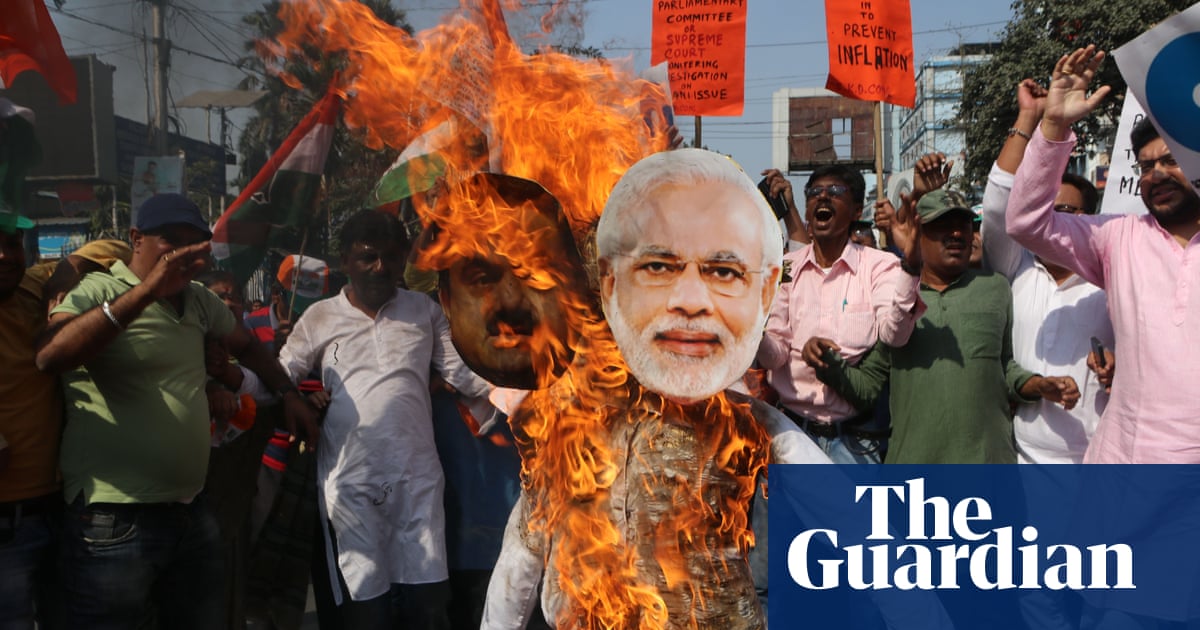 The crisis engulfing the Adani Group has intensified as hundreds of members of India’s opposition parties took to the streets to press for an investigation into allegations by a US short-seller against India’s second-biggest business group which triggered its market rout.

The Adani Group said on Monday that its major investors, known in India as “promoters”, had pledged to prepay $1.1bn (£916m) in share-backed loans due for repayment by September 2024. The repayments include shares in Adani’s ports business, Adani Green Energy and Adani Transmission.

Members of the opposition Congress party have been urging the prime minister, Narendra Modi, to order an investigation into the Adani Group companies after a US-based short-selling firm, Hindenburg Research, accused them of various fraudulent practices. The Adani Group has denied any wrongdoing.

In Delhi, Congress party workers threw fake currency notes in the air and chanted slogans. Some burned a suitcase plastered with images of Modi and the Adani Group head, Gautam Adani. Some protesters scaled police barricades and were detained and taken away in police vans.

Opposition party workers in the financial capital, Mumbai, and the southern city of Chennai gathered outside the offices of a state-run bank and the country’s largest insurer, which are known to have investments in Adani shares.

So far, there is no sign the fracas is spreading across India’s financial sector and the protests are more a reflection of political theater rather than spontaneous public outrage. Lawmakers disrupted parliament for a third day on Monday as calls mounted for India’s market regulator to look into Hindenburg’s claims.

Adani and his companies have lost tens of billions of dollars as investors dumped their shares. Last week, the group cancelled a $2.5bn share offering, promising to provide refunds to investors.

The billionaire’s fortune had grown by more than 2,000% in recent years. Critics say he has benefited from strong relationships with Modi and his government, while others point out he also prospered under previous administrations.

“What action has been taken, if ever, to investigate the serious allegations made over the years against the Adani Group?” Jairam Ramesh, the Congress party’s general secretary, said in a statement issued over the weekend. “Is there any hope of a fair and impartial investigation under you?” he said in a reference to Modi.

Shares in Adani Enterprises, the group’s flagship, wobbled on Monday and were down 2.1% by mid-afternoon. Its market value has shrunk by more than 50% since the Hindenburg report. Stock in five other Adani listed companies fell by 5% to 10%.

The move to repay share-backed borrowing early addressed one of the key concerns raised by Hindenburg: heavy borrowing using group shares as collateral. Adani said the pledge by major shareholders to repay that debt was “in continuation of promoters’ assurance to prepay all share-backed financing”.

The wild swings in share prices have highlighted concerns over corporate governance, especially as the country tries to woo foreign investors.

On Saturday, the Securities and Exchange Board of India (SEBI) issued a rare statement seeking to calm investors.

“During the past week, unusual price movement in the stocks of a business conglomerate has been observed,” the market regulator said, without naming the Adani Group. It said mechanisms were in place to deal with volatility in specific stocks. The SEBI would examine any information before taking appropriate action, it said.

Adani built a fortune in trading and in coal mining and then branched into construction, power generation, operation of ports and airports, manufacturing defence equipment and running a media company.

Before the latest troubles, Bloomberg’s billionaire index listed Adani as Asia’s richest person and the world’s third wealthiest. Bloomberg’s rankings now put him at 21st wealthiest after his net worth sank to $59bn from $120bn.