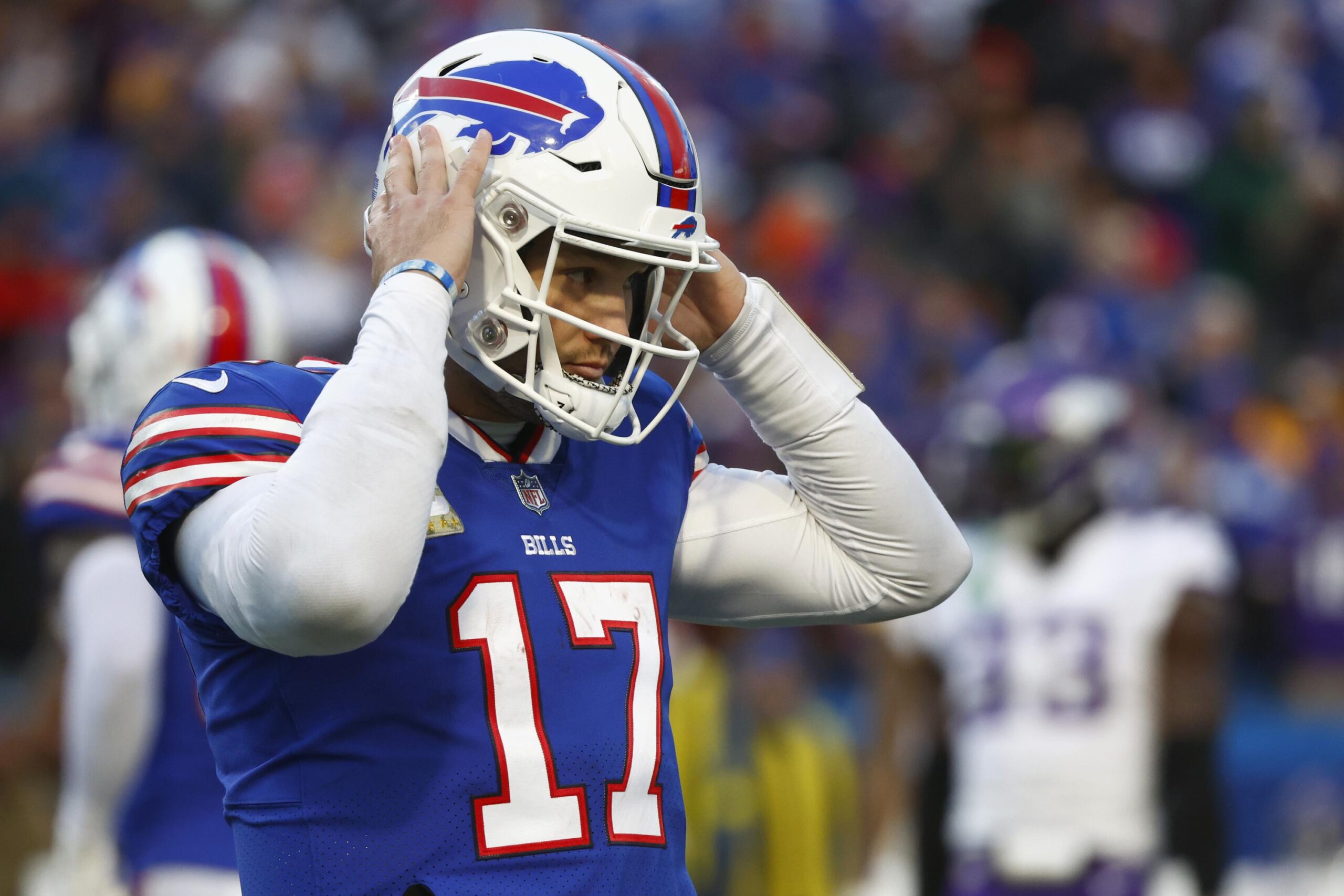 ORCHARD PARK, N.Y. (AP) — If his injured throwing elbow is fine, as Josh Allen insisted following his and the Bills’ latest second-half meltdown, then it might be fair to suggest the issue with the quarterback’s recent rash of turnovers rests more between his ears.

Allen’s competitiveness is undeniable. And yet his stubbornness in choosing to shoulder too much of the offense is beginning to hurt his team.

Buffalo (6-3) has lost two straight and tumbled out of first place in the AFC and sits third in its division following a 33-30 overtime loss to Minnesota on Sunday in which Allen’s three turnovers (two interceptions and a lost fumble in his own end zone) contributed heavily to the Vikings overcoming a 17-point third-quarter deficit.

There Allen was, with his head down, conducting his postgame news conference by once again acknowledging he must be smarter with the ball.

“Horrendous second half. I gotta be better,” Allen lamented.

If it sounds familiar, it is, because Allen issued similar sentiments following his two previous outings.

After throwing two interceptions in a 20-17 loss at the New York Jets a week earlier, Allen said: “It’s tough to win in this league when you’re playing a good team and your quarterback plays like (expletive).”

Two weeks ago, after throwing two second-half interceptions in a 27-17 win over Green Bay, Allen said: “Can’t put our team in a situation where the only way that team gets back in it is by turning the ball over — and two stupid ones that I really had no business throwing.”

Perhaps, an intervention of sorts might be in order for Allen who in one month has gone from leading the NFL in yards passing and touchdowns passing entering Buffalo’s bye week, to entering Monday leading the league with 10 interceptions — six coming in his past three outings.

Sure, blame can be placed elsewhere for Buffalo’s midseason slump.

The defense has allowed a combined 529 yards rushing in its past three outings. An injury-depleted secondary was unable to contain Vikings receiver Justin Jefferson, who had 10 catches for 193 yards and a touchdown.

Clock management is an issue, too. Up 27-23, the Bills ate up just 68 seconds of game time by attempting three passes (two of them incompletions) in giving the Vikings back the ball with 3:26 left in regulation.

And yet, much of the troubles go directly to Allen for attempting to do too much in forcing the ball when he shouldn’t be, and placing the burden on the defense to bail him out. The defense has actually held up in allowing just 47 points (six TDs, two field goals and a missed extra point) off Buffalo’s 18 giveaways.

Four of Allen’s past seven turnovers have come in the red zone.

His fumbled snap recovered by Minnesota’s Eric Kendricks for a touchdown came one play after Buffalo stopped Vikings quarterback Kirk Cousins for no gain on fourth down at the half-yard line with 49 seconds left. And he closed overtime by slamming his helmet to the turf after being intercepted in the end zone on second down with Buffalo in position to at the very least come away with a tie.

Much of the Bills’ success the previous two seasons — consecutive AFC East titles and three playoff victories — can be attributed to Allen. It’s only fair, too, he shoulders the blame for what’s gone wrong of late.

And yet, receiver Stefon Diggs cited one of Miller’s familiar mantras by raising a sliver of concern.

“Von always says don’t blink,” Diggs said. “And I feel like we might be blinking a little bit.”

First-half scoring. The Bills have outscored their past three opponents before halftime by a combined 62-27.

Second-half scoring. The Bills have been outscored after halftime in their past three outings by a combined 43-12.

S Jordan Poyer. If the veteran starter in the final year of his contract is making a point regarding his value to the defense by missing his second straight game with an elbow injury, he’s certainly succeeded. Buffalo is 1-3 when Poyer doesn’t play.

Allen. In the second half and overtime of his past three outings, he’s combined to go 25 of 55 for 337 yards with five interceptions, one lost fumble and no TDs.

LB Tremaine Edmunds didn’t return after aggravating a groin injury. … WR Jake Kumerow (ankle) is considered week to week. … Coach Sean McDermott said Allen “came out of the game in a good spot,” in reference to the quarterback’s right elbow.

4-3 — Buffalo’s record this season when tied or leading at the half.

Two winnable games, perhaps, over a short week. After hosting the Cleveland Browns (3-6) on Sunday, Buffalo travels to play Detroit (3-6) on Thanksgiving Day.