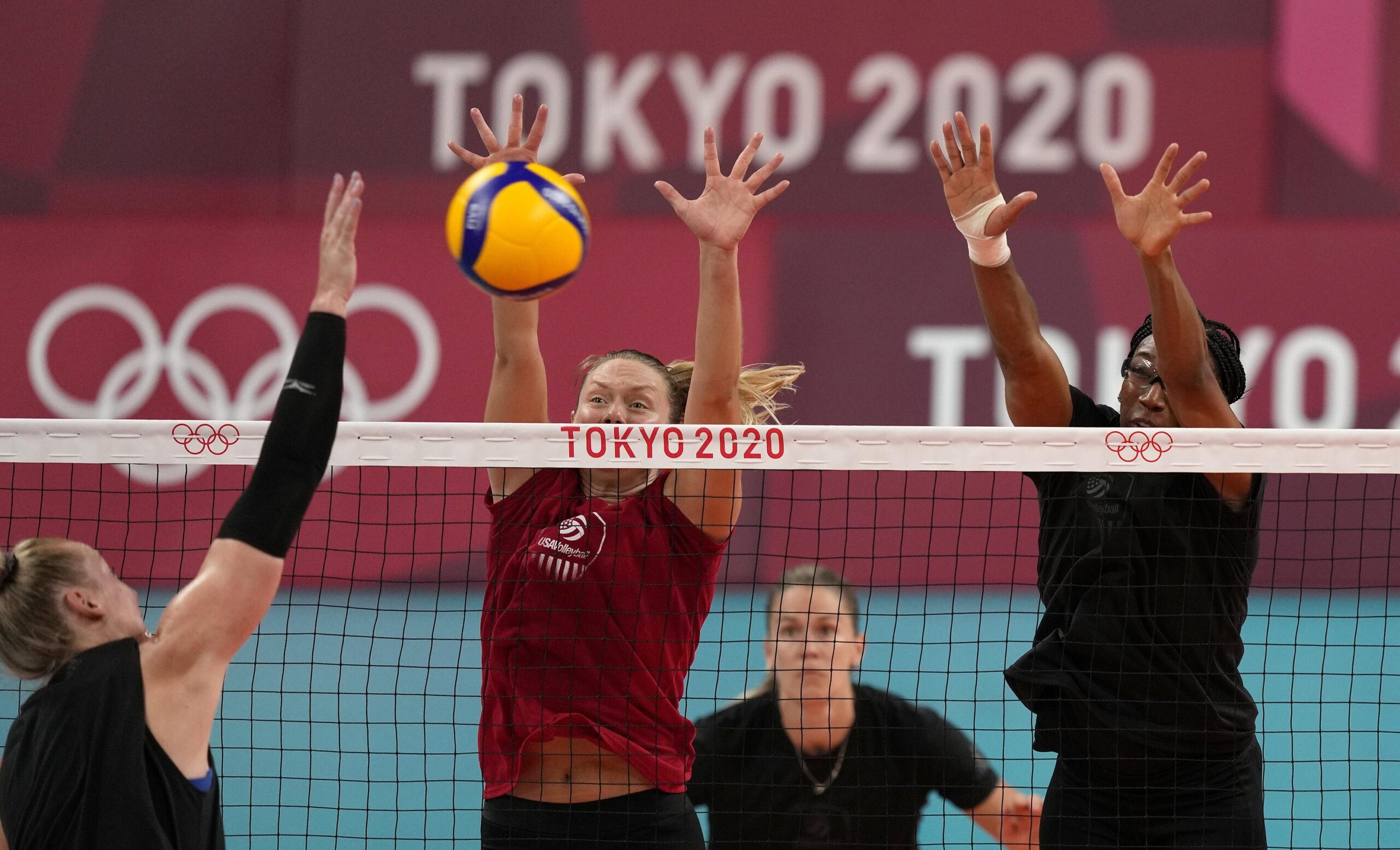 LAGUNA HILLS, Calif. (AP) — Authorities on Thursday were looking for three Olympic medals belonging to a member of the U.S. women’s volleyball team after they were stolen from a Southern California home.

The medals were being temporarily stored at a Laguna Hills home and were inside a safe that was taken in an Oct. 29 burglary, Orange County Sheriff’s Department said.

No arrests have been made.

The gold medal was from the 2020 Tokyo Olympics, the silver from the 2012 London Olympics and the bronze from the 2016 games in Brazil.

Authorities didn’t immediately identify the owner of the medals.

It’s the second time this year that a medal belonging to a member of the women’s volleyball team has been stolen in Orange County.

Jordyn Poulter reported her 2020 gold medal stolen May 25 after her car was broken into at a parking garage in Anaheim, police said.

Detectives later arrested a suspect in the theft, but weren’t immediately able to locate the missing medal. It was finally returned in June after the owners of an Anaheim barbershop reported finding the medal inside a plastic bag discarded outside their business and turned it over to police.

A 31-year-old Anaheim resident described by police as having a lengthy criminal history has been charged in the theft.

US women fall to Germany, 1st 3-game losing streak since ’93 TOKYO (AP) — A senior official with the Tokyo Olympic organizing committee and three company executives were arrested Wednesday in an ongoing bid-rigging scandal related to the Games.

Yasuo Mori, the Olympic official, was arrested along with Koji Henmi, who headed the sports division at Japanese advertising giant Dentsu. Two other business executives were also arrested on charges of violating anti-monopoly laws, the Tokyo District Prosecutors said in a statement.

Prosecutors have also been investigating a separate bribery scandal centered around former Dentsu executive Haruyuki Takahashi, who was a member of the organizing committee.

The bid-rigging probe in general involves the choice of venues for Olympic test events as well as for the actual Games. It is a joint operation of the Japan Fair Trade Commission, which looks at violations of anti-monopoly laws.

Prosecutors said the officials secretly agreed on the bids in 2018.

Some of the contracts had only one bidder, according to Japanese media reports. Prosecutors say the bid-rigging scandal arrests have just begun and could embroil more companies.

Upon conviction of violation of anti-monopoly laws, individuals can be sentenced to up to five years in prison.

The sprawling corruption allegations surrounding Tokyo have caused the bid by the northern Japanese city of Sapporo for the 2030 Winter Games to be placed “on hold.” Sapporo was considered the favorite before the scandal.

Salt Lake City is the only other known bidder that might consider taking 2030. Salt Lake officials have said they favor a bid for 2034.

The Tokyo Games were postponed for a year and held in 2021 because of the COVID-19 pandemic. The official price tag is $13 billion, though a government audit suggests it might be twice that much.

Takahashi and officials at several other companies were earlier arrested in the bribery scandal. Plans for those trials are beginning. Takahashi was released on bail after being held for several months.

Among the companies embroiled in the scandal involving Takahashi are Aoki Holdings, a clothing company that dressed Japan’s Olympic team; Sun Arrow, which produced the Tokyo Olympic and Paralympic mascots named Miraitowa and Someity; and Kadokawa Group, the publisher of the Games program and guidebooks. In an essay that The Players’ Tribune published Tuesday, Jessica Pegula detailed for the first time the medical crisis that abruptly removed her mother from the public eye and suggested that her mother may not resume the same level of involvement in the family’s sports franchises.

Kim Pegula, she wrote, went into cardiac arrest while sleeping and received lifesaving CPR from another daughter until paramedics arrived and restored her heartbeat. The family previously said only that Kim Pegula was receiving medical care for “some unexpected health issues” that arose shortly after she celebrated her 53rd birthday.

“My mom is working hard in her recovery, she is improving, but where she ends up is still unknown,” Jessica Pegula, 28, wrote.

She said she decided to write about her mother’s ordeal after Bills player Damar Hamlin went into cardiac arrest on the field during a Jan. 2 game in Cincinnati in what Pegula described as “some bizarre, messed-up, full circle moment.”

“My stomach sunk because it felt like the exact same thing all over again. I was sitting on the bench for a tennis event in Sydney, Australia. I wanted to throw up,” wrote Jessica Pegula, who is No. 4 in the WTA’s singles rankings. “I was supposed to go on for mixed doubles in 15 minutes and I remember telling one of my teammates, `I am a little freaked out right now, this is too close to home, and I feel like I am going to have a panic attack.’”

As Hamlin began his recovery, Jessica Pegula joined in an outpouring of support from fans and the NFL and wore a white screen-printed patch with Hamlin’s uniform number while playing at the Australian Open. “It didn’t feel like it was just for him, it felt like it was for my mom as well,” she said.

Jessica Pegula had been home in Florida months earlier when she got a call from her sister, Kelly, around midnight on their mother’s birthday and learned that their mother was being rushed to the hospital.

“My mom was asleep when my dad woke up to her going into cardiac arrest and she was unresponsive for quite a while,” she wrote. Kelly Pegula, who was staying with their parents, performed CPR — just three months after telling her family that she planned to become certified in the procedure for a job.

“I remember her telling us what she was doing in our family group chat,” Jessica Pegula wrote, “and my mom even responded, `Nice Kells! Now if we have a heart attack you can revive us.’”

Today, Kim Pegula “can read, write, and understand pretty well, but she has trouble finding the words to respond,” Jessica Pegula wrote. “It is hard to deal with and it takes a lot of patience to communicate with her, but I thank God every day that we can still communicate with her at all. The doctors continue to be blown away by her recovery, considering where she started, and her determination is the driving force of that.”

As the first woman to serve as president of an NHL and NFL team at the same time, Kim Pegula “lived it and loved it, and it was felt by everyone she met,” Jessica Pegula wrote. “Now we come to the realization that all of that is most likely gone. That she won’t be able to be that person anymore.”

Mat Ishbia to AP: Suns ‘will be one of best places to work’ Mat Ishbia said his first major project as owner of the Phoenix Suns will be to listen to employees and figure out what problems they’ve faced.

After that, he’ll start fixing.

The tenure of embattled Robert Sarver as owner of the NBA’s Suns and WNBA’s Phoenix Mercury officially ended Tuesday, when Ishbia — the chairman, president and chief executive of United Wholesale Mortgage, plus a member of Michigan State’s NCAA championship team in 2000 — took over. He will be governor, while his brother, Justin Ishbia, will be alternate governor.

Justin Ishbia will be the team’s second-largest shareholder, behind his brother. They acquired more than 50% of the franchise, which includes all of what was Sarver’s stake as well as some holdings of minority partners, and the sale valued the Suns and Mercury at $4 billion.

“I’m going to spend a lot of time listening and learning, then make the adjustments to make this not only one of the best organizations in the NBA but also one of the best places to work,” Mat Ishbia told The Associated Press. “That’s a huge part of my success here in Michigan and it will be a big part of our success now in Phoenix. I don’t have enough information to know what exactly it’s been like, but I will dig in and roll up my sleeves and figure it out over the next three, four, five months-plus.”

The 43-year-old Ishbia was announced as the owner-in-waiting of the Suns on Dec. 20, and the last hurdle before the purchase became official was cleared Monday night when it was revealed that the NBA’s board of governors approved him as the next owner.

The transaction was completed Tuesday. Ishbia will hold a news conference in Phoenix on Wednesday.

Sarver was suspended for one year by the NBA in mid-September after an investigation found he engaged in workplace misconduct that included racist speech and hostile behavior toward employees. About a week after NBA Commissioner Adam Silver announced the suspension and $10 million fine — the most allowed by league rule – Sarver said he would start the process of finding a buyer.

Ishbia’s name had been linked to other potential sales of pro sports teams in the past, including the NFL’s Washington Commanders. And the self-described basketball nut jumped quickly to acquire the Suns and Mercury.

“This is what I wanted the whole time,” Ishbia said. “My name got linked to a lot of things. That doesn’t mean it was actually necessarily right. The Phoenix Suns, in my opinion, is one of the elite franchises in one of the elite cities in America. To have a chance to be one of the owners of the Suns and Phoenix Mercury is a dream come true.”

Ishbia’s company, UWM, employs about 7,000 people. It had over $226.5 billion in mortgage originations in 2021, which the company says is a record for wholesale volume.

“We’re all about culture,” Ishbia said. “We’re all about people. We’re all about the word ‘team.’ It’s almost like a match made in heaven — the city, the location, the NBA, my love of basketball. And I can come in, take some of the really good things they’re doing but maybe make some changes from a culture perspective.”

There is one immediate order of business: The NBA trade deadline is Thursday.

The Suns — who went to the NBA Finals in 2021, losing a 2-0 lead and falling to Milwaukee in six games, had the best regular-season record in the league last season — are in a muddled Western Conference playoff race this season.

Ishbia said he and team president of basketball operations James Jones, who is also the general manager, have talked and will keep talking while Jones gauges the market to see what moves, if any, are right for the Suns.

Ishbia played for Tom Izzo at Michigan State, and he got into the 2000 title game against Florida at the end. He knew he was out of bounds when he picked up a loose ball in the final moments, but no referee blew the whistle. Sensing opportunity, Ishbia tried a reverse layup at the buzzer; it missed, but he celebrated anyway.

He senses another opportunity now.

“For me, this is a lifelong dream,” he said.